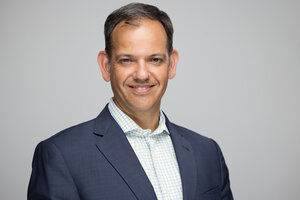 Electra.aero, a next-gen aerospace company devoted to sustainable urban & regional mobility, announced today that Dr. Robie I. Samanta Roy has been appointed as Chief Operating Officer.  Robie joins Electra from Lockheed-Martin, where he served most recently as Vice President for Technology - Government Affairs.

“Electra is systematically putting in place a world-class leadership team as we work towards certification and production of our hybrid-electric aircraft for urban and regional mobility” said John Langford, founder and CEO of Electra.  “Robie’s background in the development and deployment of advanced technology, as well as his broad experience in the aerospace industry, will be invaluable to Electra’s continued growth”.

“I am excited to join John and his team.  He is a well-regarded aerospace innovator and entrepreneur and Electra clearly is leading at the intersection of green aviation and advanced air mobility,” said Robie.  “I look forward to leveraging my diverse set of experiences in government and in a large aerospace company to help Electra advance in the commercial and defense sectors.”

Robie was Vice President of Technology – Government Affairs at Lockheed Martin where he was responsible for supporting corporate engagements with the US Government science and technology community across the United States.  Robie also served as Lockheed Martin’s Corporate Vice President for Technology Strategy and Innovation under the Chief Technology Officer where he developed and provided technical intelligence and strategy for the corporation, engaged the global S&T ecosystem outside the corporation, and fostered cross-enterprise innovation.

Prior to joining Lockheed Martin, Robie was a professional staff member with the Senate Armed Services Committee with the portfolio of the Department of Defense’s wide spectrum of science and technology-related activities including test and evaluation.  He came to that position from the White House Office of Science and Technology Policy where he was the Assistant Director for Space and Aeronautics and was responsible for space and aeronautics activities ranging from human space flight to the Next Generation Air Transportation System.  Robie also served as a Strategic Analyst at the Congressional Budget Office and as a Research Staff Member in the Systems Evaluation Division of the Institute for Defense Analyses.

Dr. Samanta Roy earned his Bachelor of Science, Master of Science and Ph.D. degrees in aeronautics and astronautics from MIT. He earned a master’s degree in space policy from George Washington University and diplomas from the International Space University and Institut d’Etudes Politiques de Paris.